AN INSPIRATIONAL VIEW OF PROJECT LOON

“Striving to Change Myself and the World for the Better

“Courage is the enforcing virtue, the one that makes possible all the other virtues common to exceptional leaders: honesty, integrity, confidence, compassion, and humility.”
“We to understand, correctly, that courage is not the absence of fear but the capacity for action despite our fears.”
The most famous, most articulate man I have watched. made the above quotes. Some found him less than perfect.
He was a prisoner of war in North Vietnam’s Hanoi Hilton for over five years of torture and mistreatment of the worst kind.
He had been a United States Senator and then an Elder Statesman. He will rank with all the great men of yesteryear and maybe the last one to come our way.
At the time of this great speech, to honor him with the award of the Liberty Medal, he was terminal brain cancer.
Senator John McCain fought the good fight. He has won all the battles that needed winning.
He won the war against lesser men who spout inane stupidities and lies and have no regard for the great country we are.
He has been a staunch supporter of the people of Arizona and of the United States of America.
He will live long in our memories.
In his honor, I will feature images of the great state of Arizona.

I had to go back and re-read this post. Not only are they fascinating topics to study, but they are also even fun to talk about.
I want to look at the explanations by Calum McClelland who is the Vice President of Operations and Projects at Leverage. He is also Director of Operations for IoT.
I found his article on Medium several years ago. I will try to bring it up to date.
Mr. McClelland starts his discussion by getting everyone on the same page. “We’re all familiar with the term Artificial Intelligence.” It’s been a popular focus in movies such as “The Terminator,” “The Matrix”, and “Ex Machina.”
I’ll begin by explaining what AI, ML, and DL mean and how they’re different.
He continues “then, I’ll share how AI and the Internet of Things , with several technological advances converging at once to set the foundation for an AI and IoT explosion.”
He called that right. I read this article on February 2nd, 2017. Let’s try to expect what he predicted and what has been taking place in the last two years.
John McCarty, in 1956, first coined the phrase “Artificial Intelligence” or “AI”. AI can perform tasks characteristic of human intelligence. It includes planning, understanding language, recognizing objects and sounds, learning, and problem-solving.
We can put AI into two categories, general and narrow. General AI would have all the characteristics of human intelligence, including the capacities mentioned above.
Narrow AI exhibits some facets of human intelligence, and can do that facet extremely well, but is lacking in other areas. A machine that’s great for recognizing images but nothing else would be an example of narrow AI.
Machine learning is a way of achieving AI.
Arthur Samuel coined the phrase Machine Intelligence in 1959. He defined it as, “the ability to learn without being explicitly programmed.” You can get to AI without using Machine Learning but oh it would take building millions of lines of code with all the complex rules and decision-trees.
Instead of hard-coding software routines to execute a particular task, machine learning is a way of ‘training’ an algorithm so it can learn how to do it. “Training” involves dealing with massive amounts of data sets and allowing the algorithm to sort itself out by adjusting and improving.
Something like the Marine Corps ‘Adapt and Execute. At least it did when my three sons were in the corps. That was about oh 20 years ago. I guess that really dates me and believe me I feel every pulled muscle and strained ligament from each misstep during that time.
Machine learning has helped to improve computer ‘vision’ (the ability of a machine to recognize an object in an image or video).
Gather millions of pictures and have humans tag them. They would take a picture of a dog and of a cat. When the algorithm to build a model of a cat, it can tell the difference. When it has performed this feat accurately thousands of times, it has ‘learned’ what the difference between that cat and that dog.
Deep learning is one of the many approaches to machine learning. Other approaches include decision tree learning, inductive logic programming, and others.
The brain, its structure, and its function inspired deep learning. Also, the neurons . Artificial Neural Networks (ANNs) are algorithms that mimic the biological structures of the brain.
“In ANNs, there are neurons” which have discrete (individually separate and distinct” layers and connections to other neurons. Each picks out a specific feature to learn, such as curves or edges in image recognition.
It is this layering that gives deep learning its name, otherwise stated as depth created by using multiple layers as opposed to a single layer.
Just before going to press with this article IBM announced they had made great strides in ‘speeding up’ these processes which will save incredible amounts of time to learn and get functioning.


Artificial Intelligence and the Internet of Things (IoT) are much like the relationship between the human brain and body.
“Our bodies collect sensory input such as sight, sound, and touch. Our brains take that data and make sense of it, turning light into recognizable objects and sounds into understandable speech. Our brains then decide, sending signals back out to the body to command movements like pickup up an object or speaking.”
This Internet of Things is like our body, sensors connected and raw data streaming in and forwarded to the “brain”. Artificial Intelligence makes sense of that data and deciding what actions to perform.
The connected devices of IoT are on the receiving side, carrying out the actions or communicating with other devices.
That is far enough today since we have other things to look at.

Who is Smarter Google AI or a First Grader?

Google’s Artificial Intelligences outperforming Apple’s Siri. (Say it ain’t so Joe!) Google’s AI Deep Mind  as having an IQ of 47.28. China’s search engine Baidu had a score of 32.92, Microsoft’s Bing measured31.98 and Siri scored 23.94 — less than half of Google’s. This was back in 2017. I haven’t found more recent tests yet.
For comparison, a six-year-old child has an IQ averaging around 55.5. An average 18-year-old averages 97.
Some historical context: in 2014 Deep Mind rated 26.5 and Microsoft had a 13.5. Within two years both had exploded. So, are we going to fall on our swords because of AI? Elon Musk predicts AI will cause our downfall. It is too early to tell; I think.
In fact, the heads of Google CEO Sundar Pichai and Microsoft’s CEO Satya Nadella have both shifted resources to speed up development.
Amazon is spitting out new models of Alexa every year. Also Amazon’s AWS, their cloud computing service is larger than either Google or Microsoft’s. You can even get a free account for Microsoft’s Azure.

Project Loon to the Rescue

Google got a temporary license from the FCC to deploy 2 helium balloons for the purpose of beaming emergency LTE internet over the islands of Puerto Rico and the U.S. Virgin Islands.
The balloons float at 65,000 feet and send 160 Gb of data. They cover an area about the size of Sweden and the data is comparable to receive around 30 million WhatsApp messages or 2 million emails.
Google has provided Project Loon balloons to Peru, France, Brazil, New Zealand, Indonesia, and Sri Lanka.

I also write for Medium .com. I have two publications on that site "Finite Wisdom" and "Centering Yourself" 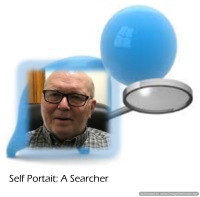 Posted by Craig Martineau at 1:37 AM